What's in the garage

I grew up in a household were there were three acceptable conversations at dinner: Cars, Horses and maybe politics.  As the youngest of four, I learned that I needed to pick something I was interested in.  Cars surfaced as the topic of my interests.

I spent several of my summers working in my Aunt and Uncle's factory (deTomaso Automobili) in Modena Italy.  I learned some mechanical skills, but a lot about the life of a small manufacturer.  Like many I did not appreciate the experience until much later.

My summers in Europe exposed me to automotive culture of the small practical car (funny given that I worked at deTomaso and Maserati, not known for their small or practical nature.)  I can remember as the plane landed at the airport, I pressed my nose to the glass to see those "odd little" cars.  I learned that Italy was the home of many brands but more interestingly - many designers.  My mother was a GM child and that is where she gravitated, so I was very use to those designs.  The GM brands owned the designs, so the car equaled the style which was tided to the brand.  In comparison, Fiat had cars designed by Ghia, but also Pininfarina. My aunt was a true automobile aficionado, while also being a former race car driver, and she had a great eye for design houses.  Obviously her experience working with Ghia meant that she knew those designs, but she knew the "Style" of the others.  She would quiz my sister and I on different cars.  We learned the design ques, as well gaining an appreciation for design and function.  For example, I leaned why a B pillar needed but how to lessen it's appearance or why to accentuate it.

Working in the factory, I saw a lot of interesting design things.  When you are making very "hand built" there were times when there was little to do.  While waiting for parts or even guidance from Testa (The lead for the Pantera), I would walk around and look at the cars.

There was one section of the factory where many cars were stored.  These cars were a mix of customer cars, cars that were owned by my Aunt and Uncle, or old race cars.  Among those cars was the "Thore", a concept car that Ghia for GM.  It started life as a Oldsmobile Tornado, but was sent to Ghia for a light concept change.  To me it was the best of both worlds - GM car but European design.  I knew the car as a child, as it was driven around after my father's death, by a family friend - Megel Mendoza.  The story goes that Megel drove the car one day and left the windows open.  There was a short and the car would not start.  It sat in his garage until it was shipped to Modena.  It sat in the factory until it was "refeshed" for the 45th anniversary.  When my brother and I drove it around that event, two important things still did not work - the gas guage and the windows.  Not great when in Italy and the temp was 90+. 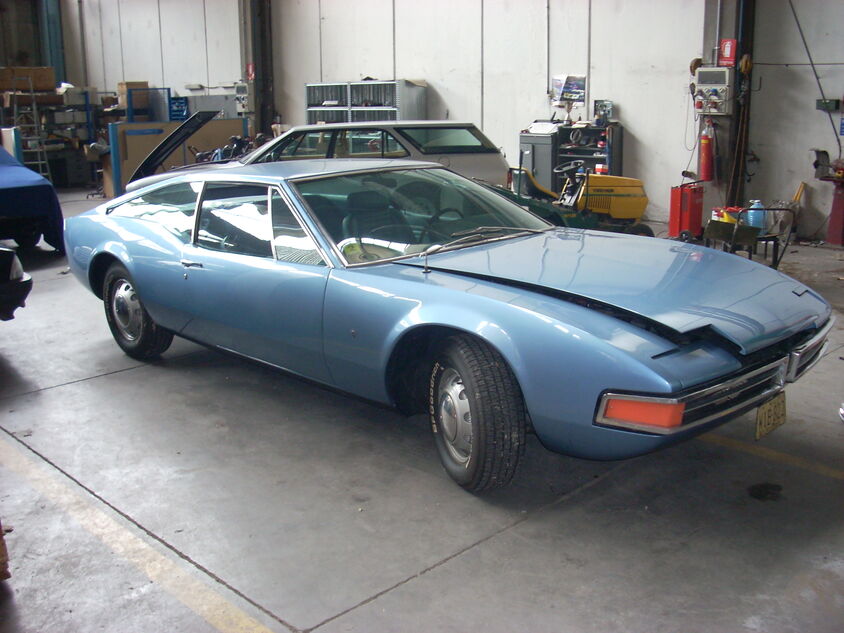